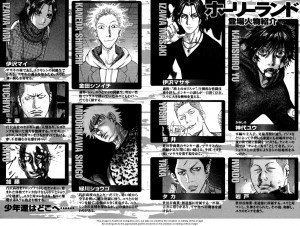 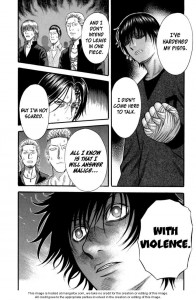 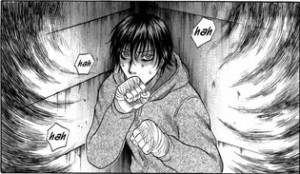 Years before the series begins, Yuu was bullied relentlessly at school, so much so that he ended up opting for homeschooling (or whatever the equivalent is in Japan). Taking most of his coursework on his computer, he shuts himself up in his room and off from most human contact.

He reaches a breaking point when he realizes that even his parents and sister think of him as nothing more than a pathetic failure. He contemplates suicide, and even goes through the motions of attempting it, but discovers he is too much of a coward to go through with it.

His rise out of solitude begins when he starts imitating the techniques he finds in a boxing book. Kouji (the artist) attempts to sell us the implausible notion that a weak shut-in could develop a polished one-two punch by making it clear that Yuu begins this process purely to take his mind off of his wretched existence.

It gets to the point where he claims he was practicing the punch combination five thousand times a day (probably not possible, but we can imagine someone like Yuu in real life who fixated on some repetitive task day in and day out).

Sick of being shut indoors and cut off from everything, Yuu re-entered the world in high school, both by returning to an actual school, and by beginning to roam around town after school each day. This is where the story begins—because he looks like an easy mark, thugs keep trying to intimidate him and take his money. But because he’s practiced the one-two punch obsessively, he does it almost instinctively and easily dispatches with them one after one. Eventually a rumor begins to crop up about someone they refer to as a “thug hunter” who looks like a wimp but is going around and hunting down all the tough guys in town. Which then encourages more people to seek him out to prove themselves by beating him.

From the beginning, Yuu exhibits the mentality of a cornered animal. At at the outset, it seems justified. After all, he isn’t picking any fights—people keep going after him! He’s the good guy here, right?

But as the series progresses, it becomes clear that there is something seriously wrong with him. The fact that he can stand up to bullies now did not make him whole; if anything it exacerbated things by drawing him into a cycle of violence he was incapable of tearing himself from.

Fighting manga love to get the shit beaten out of their characters only to have them come back from behind. This trope is trotted out to demonstrate the hero’s fighting spirit, pride, virtue, whatever it is. In Yuu’s case, it looks this way at first, but before too long it is clear that his inability to yield is part of his sickness.

Yuu believed that he was always standing on a razor’s edge while out in the world, and that falling meant going back to hiding in his numb, isolated box of a world he was in when he dropped out of school. Even though it becomes clear that there are several times when he could simply back down, or admit defeat, and face less trouble, he’s incapable of seeing things that way.

He believes that he is completely cornered. He is in many ways myopic; unable to see beyond his victimhood to other people who exist and are living their lives outside of his struggle.

This manifests itself not only in the fighting, but in the fact that he simply does not notice people who have noticed him. The character that becomes his best friend:

And the girl who becomes his romantic interest introduces herself to him no more than three times before he finally starts remembering who she is.

While the reader is definitely meant to empathize with Yuu’s internal struggle (and be entertained by his external one), there is something fundamentally selfish about the way that Yuu responds to perceived threats. 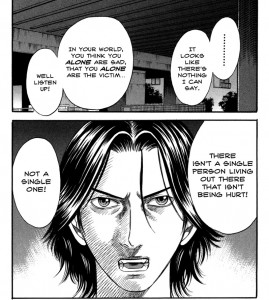 The story of Holyland could be described as Yuu discovering people beyond himself and figuring out whether it will be possible for him to change from the person who shut himself off from the world and from feeling. 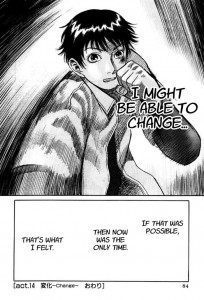 Or, conversely, whether his bitterness and anger will turn him into something terrible, something worse even than the bullies that made him the way he was.

The resolution of this is part of what I find satisfying about the series. It is handled well, in my opinion. But I won’t give any more spoilers! If you like action type stories anyway, I would definitely check it out (just Google “Holyland Manga” and you should find dozens of online manga readers that host it. There’s also the bittorrent route if you prefer. Remember to read each panel from the right to the left).

One of the things that might put people off from the manga, but that I enjoy, is that Kouji himself is the narrator, and refers to “I (the author)” repeatedly when making certain observations.

One of the things that characterizes Holyland is the ridiculous amount of explanation that Kouji includes about what’s going on in a fight.

What’s interesting to me is that this seems to be symptomatic of an obsession in Kouji’s own life, perhaps not to the same extent as Yuu’s but with similar roots. Kouji frequently references problems that he experienced in his life in order to explain what Yuu is going through at a particular moment.

When you’ve read the series beginning to end, you get the impression that Kouji is using it as a vehicle for working through something himself. It lends a certain integrity to the work that I appreciate.

I’ve tried to find more information about Kouji, but there isn’t any that I could find in English, and nothing obvious in Japanese (assisted by Google and Google Translate). I’m kind of curious about the incidents he refers to in passing, but I suppose it will have to remain idle curiosity.