It is difficult to pinpoint the precise moment that the privacy norm died, but historians tend to emphasize a few key developments. The global adoption of the Internet, World Wide Web, and smartphones were obviously the beginning. The rise of services that gathered user data to monetize through various strategies on the one hand, and systemic state surveillance such as was practiced early on in China on the other. A few open source projects which made it trivially easy for even the technologically unsavvy to get around all but the strictest security practices.

Whatever moment in these and other progressions it happened, the notion of “secret” gradually expired while no one was looking. The result was a radically transparent society unprecedented in human history.

The initial discontinuity clearly occurred a few short decades after the birth of the Web, and the result was a great deal of disruption and upheaval at first. It took less than a generation, however, for people to simply become used to it.

There was a lot of fear about what what happen under a mass surveillance state. But the private lives of the state officials who would pursue prosecution were also an open book, and any unsavory personal or organizational agendas were in plain view. As a result, in those countries where success in the public sector was highly sensitive to public perceptions, the transition was basically a wash. In police states such as China, tyrannical laws were already selectively enforced to begin with. The new transparency made it clear how large a swath of the population was dissatisfied, and how corrupt the ruling regime was. It also made it harder to stop insurgents from finding and doing harm to top officials, though it made it easier to find them after the fact.

In short, the result of an initial upsurge in violence and persecution was largely a shift in norms that kept social and political life in the status quo.

A few generations in, when history teachers explained to their students that their ancestors had clung fiercely to concepts of privacy and secrecy, they were baffled. How did any solve any crimes? What did the older generations think they had to hide? Of course, as with the young of any era, it was inconceivable to them that society could ever have functioned at all outside of the particular framework they grew up in. Even though they continued to be taught that crime rates and wars and censorship around the world had basically remained the same before and after the transition, few could bring themselves to believe it.

Stories about how the world keeps on turning, mostly indifferent to the things individuals find fascinating, are boring, and soon forgotten. 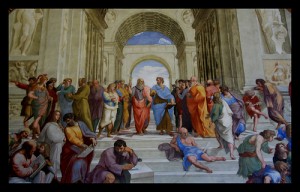 When I read Clay Shirky’s Here Comes Everybody, or Kevin Kelly’s What Technology Wants, I was confronted with some truly big think ideas that took me a few months to really digest and get my head around after I had finished them.

Reading Jeff Jarvis’ Public Parts, by contrast, felt more like continuing a conversation that had been going and would continue well after I finished the book. In part this is because I listen to This Week in Google every week, and watched as Jarvis formulated the idea for the book and gradually became chief publicness advocate on the show.

But I had also been having discussions on this subject on my own. When Google+ first launched on an invite-only basis, they were looking for all the feedback they could get. The whole concept behind circles was to give people maximum control over their privacy with the minimum possible effort, in response to concerns expressed about Facebook, not to mention Google itself. The debates that took place those first couple of weeks made me eager for Jarvis’ book to come out–so many people put so much stock on the importance of privacy, without taking into account the value of being public!

Jarvis has been practicing what he preaches for some time, talking openly about his prostate cancer and the unfortunate side effects of the treatment on his blog. One complaint that people have about this is that most of his readers subscribe to his blog to read his commentary on media, and don’t want to hear about his surgery-induced impotence. But Jarvis argues that he, personally, got value from being public, because he received a ton of feedback from people who had experience with what he was going through and were able to give him advice.

Morever, there is a social benefit to talking about such things in public–now, anyone who has prostate cancer can find Jarvis’ blog posts on the subject–as well as all the helpful comments on them–simply by searching on Google.

Jarvis doesn’t discount privacy, but he does think there is a dearth of publicness advocates relative to the big privacy advocacy industry that has cropped up. Since participating in those discussions on Google+, and reading his book, I have begun to look at things through the lens of the value of being public.

The recent Hyperbole and a Half, Adventures in Depression, is a perfect example. I have a lot of friends and family who have suffered through depression, but I haven’t lived it myself. The writer of H&H gave someone like me an insight into what it is like that I had never had. At the same time, the people I know who have experience with depression universally seemed glad that someone had so perfectly, and humorously, described what they have gone through.

For those of us who don’t command the kind of audiences that Hyperbole and a Half or Jeff Jarvis have, there is still plenty of reason to be public. You may not even realize who cares about the events in your life and is willing to make an effort to support and encourage you if you limit the people you share with. When my friend Kelly wrote this very brave and very honest post about what she’s been going through, she received some very wonderful feedback from an unexpected source, and it made her day.

This doesn’t mean that everything needs to be made public all the time. But it’s important to take the value of being public seriously, and to think hard about how you present yourself in public.

I created this site, under this domain, on a server I pay for, because as I was reading Jarvis’ book I started to rethink the way I was conducting my public life. I have no problem with my various social network profiles, and Blogger blogs, showing up when someone Googles me, but I wanted to have one site that I owned from beginning to end, under nothing but my own name. I don’t think everyone needs to do this, but I do think it’s something everyone should consider–and something schools should be informing students is an option.

So how could you benefit from being more public?