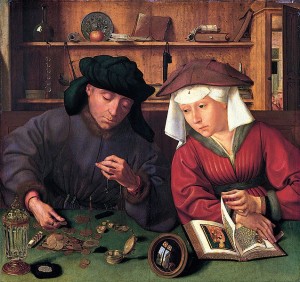 There is more to modern commercial culture than accumulating capital and mass production. Aspirations and ideals are not at odds with capitalism; they exist within it. As Deirdre McCloskey has argued and continues to argue at length, the Industrial Revolution and the resulting modernity have not hollowed out the human spirit, as many a sociologist and essayist have claimed from its early onset.

Ideals and aspirations must bend to prudence in the end; any attempt towards their realization must contend with scarcity. From this perspective capitalism does not crush ideals or push materialism more than any alternative; what discourages people in any system is the tragic but inevitable gap between reality and their ideals. Modern markets are no more relentless about this than any other system; indeed, as McCloskey would argue, they have made it possible for more people to devote themselves to the aspirational than any other systems at any other times in history.

Consider the great novelists of the 19th century; Dickens, Twain, and Dostoyevsky, for instance. All were deeply embedded in the commerce of literature of the day. Dostoyevsky wrote The Gambler to satisfy a contractual obligation, while simultaneously writing Crime and Punishment at night, a more aspirational work. Yet the quality of The Gambler did not suffer from being born of necessity; Dostoyevsky had his pride as a writer–which is another way of saying that he had ideals. Dickens, meanwhile, was famously paid by the word–yet unquestionably earned a place in the Western Cannon of English classes.

McCloskey complains that even the defenders of commerce seem to think that it’s all about prudence; that the story of modern markets is one of assembly lines that drastically reduce prices. And there is no doubt that this is a very important and much misunderstood aspect of the market process. But even there you can find the aspirational–Henry Ford stated as his explicit goal that he wished to take cars from being a luxury enjoyed by the wealthy to a commodity for those of more modest means.

Much of entrepreneurship begins simply with someone believing that they can do better. In what McCloskey calls a Prudence Only mindset, this would mean nothing more than being able to provide the same product at a lower cost, or a higher quality product at the same cost, or a higher volume of products at a lower cost, and so on. And certainly this is an enormous amount of what goes on that we would consider entrepreneurship–taking advantage of arbitrage opportunities for personal gain, in the end making everyone better off.

But there is another respect in which some entrepreneurs believe that they can do better. A sort of aspirational arbitrage. Take the slew of editors who left Engadget last year to form The Verge. They left, in the spirit of the traitorous eight, because they believed they could do better than employment at AOL would allow. Reading editor-in-chief Joshua Topolsky’s introductory letter to the new site, you can see the prudence as well as the aspirational.

They got away from AOL in part because they wanted to invest in better tools for getting their work done, certainly.

We’re going to do that on a new product that we’re really psyched about. A site that’s not just a stagnant, fixed entity, but an evolving, growing piece of technology. We think of The Verge (and its underlying CMS) as something akin to an app. A piece of software that is being constantly developed and updated. Today we’re launching with The Verge 1.0, but 1.1 and 1.2 are just around the corner.

But note also the idealism embedded in desiring a site that isn’t “just a stagnant, fixed entity” but is in fact “an evolving, growing piece of technology.” Moreover, in the context of the current state of online reporting, the letter contains some clearly idealistic features:

We’re focused on bringing you — our extremely savvy and frankly very handsome readers — the best and most comprehensive coverage of the consumer technology world. Not just the nuts and bolts, 24-hour news cycle stuff, but more in-depth coverage, bigger stories, and content that goes further.

The last couple of years in particular have increasingly seen the rise of the belief that the only way to make it in online content is through low quality, ultra high volume production. 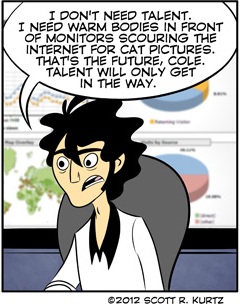 It’s either a lolcats site or a content farm, or you’re out of luck. Or so the story goes. In any case, in an industry where advertising-subsidized free to consume products is the only model that appears to work, the appeal of the content farm approach is obvious.

Topolsky et al. aspired to something more than that, something more even than what they could accomplish at Engadget. I have speculated about how their costly feature pieces might pay off for them if you take a long view, but the point is that they are trying to make it work. They take one aspiration–professionally providing in depth and long form analysis of technology and society–and set to work attempting to make it work in practice.

From a certain point of view, all commercial culture entails is taking some ideal or aspiration and setting out to gain the practical knowledge of how to accomplish the closest approximation of that ideal they can. What makes it commercial rather than political is that it is accomplished through voluntary arrangements and exchange rather than through force.

And what the enormous growth in wealth since the onset of the Industrial Revolution has done is expand what is possible. Why some have taken this to mean that ideals were abandoned along the way for wanton materialism is beyond me. I stand with McCloskey in the belief that as our material possibilities expand, so too do the aspirations we are able to pursue.

I see examples all around me. Take the indie game developer Jonathan Blow. He worked in the video game industry for decades, and was frustrated by the constraints he faced at the big studios. He believed very strongly that video games could be a form of expression, that they could be up there with any art form. So he struck out on his own and worked on a game without institutional constraints for several years, and the result was Braid.

To any gamer, Braid clearly trumpets Blow’s aspiration for something more. It is full of allusions to the history of gaming, as well as to The Lord of the Rings and other such things. There was real innovation in the gaming aspect itself–the manipulation of time was not an entirely new thing (what is, in art or anything?) but nothing had taken it as far or made it as central to the gameplay as Braid did. Blow brought in David Hellman to make the game look like a gigantic, moving, interactive painting. And he clearly put a lot of thought into the soundtrack.

Whether or not Braid succeeds as art or even as a video game is one of those questions where the answer depends on who you ask. Roger Ebert didn’t think so, to no one’s surprise. But the reason he even mentioned it is because so many people have cited Braid as a counterexample to his claim that video games could never be art. Certainly, there are people who feel it is not just a good game, but a worthy artistic work.

Of course, it has been a tremendous financial success for Blow. Yet I find it difficult to believe that financial gain was his entire motive–with the low probability of success in indie game development, the expected return of going indie was probably break even with staying at his old job. But he had an aspiration, not just to create artistic video games but to push the industry in that direction. And his initial success means that he now has the practical means to pursue more such projects.

And I can’t see that as anything but a good thing.