Ultimately it comes down to common sense. When you’re abusing the legal system by trying to use mass lawsuits against randomly chosen people as a form of exemplary punishment, or lobbying for laws that would break the Internet if they passed, that’s ipso facto evidence you’re using a definition of property that doesn’t work.

According to the RIAA, our current failure to enforce copyright has cost us $12.5 billion per year in economic losses, and over 70,000 jobs a year. The message: piracy makes us poorer and leaves tens of thousands of people per year unemployed.

I don’t think I can do a better job of responding to that sort of estimate than Rob Reid did recently with his short Ted Talk.

Putting aside the methodologically questionable cost calculations, some have argued that unless a mechanism exists for rewarding creators whose creations we value, we won’t get those creations at all–or at least, not very many of them.

I believe that this is the only question that matters.

I don’t care how many jobs are created or how much revenue the IP rights-holders make in a given year, or even if they make any revenue at all. All that matters is how much value ends up being created for consumers.

When I put out this idea on Twitter, Eli disagreed.

And the answer, in my opinion, is that we want them to do that in a way that maximizes the value to consumers in the long run. Along the way, this will inevitably provide value to producers, but that value will be fleeting, as we find increasingly efficient ways to do what they do. The important thing is to consider the value provided to consumers, for as Bastiat said, “the interests of the consumer are the interests of the human race.”

In short, our priority should be to arrive at the arrangement that provides consumers with the maximum amount of value from intellectual products. If we could provide exponentially more value to consumers from intellectual products but their producers were unable to make a dime, that would be a net improvement. That’s not the situation, but I think it’s clarifying to keep that extreme scenario in mind.

To us it seems pretty obvious that people always want to treat it as a pricing issue, that people are doing this because they can get it for free and so we just need to create these draconian DRM systems or ani-piracy systems, and that just really doesn’t match up with the data. If you do a good job of providing a great service giving people… as a customer I want to be able to access my stuff wherever I am, and if you put in place a system that makes me wonder if I’ll be able to get it then you’ve significantly decreased the value of it.

What does not help is when consumers are pushed into something by reducing their options elsewhere. When Americans pay a premium above the global price for steel or sugar, it isn’t because they value those commodities that much more than their international counterparts; it is because policy has restricted the number of alternatives available to them. This approach destroys wealth rather than creates it, leaving only a handful of producers better off at our expense.

Every policy that the big content lobbies have pursued have been of this nature. From the copyright extensions to bills like SOPA; they have sought to extract more value for themselves individually by shrinking the pie for the rest of us. All while telling us that it’s for our own good.

Their efforts always come at the expense of the honest customer who isn’t trying to game the system. Meanwhile, they have done nothing to curb piracy, which remains trivially easy. 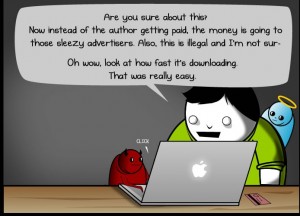 Eli recently wrote out a thought experiment where we were in a world in which enforcing laws against murder became as hard as it currently is to enforce intellectual property laws. His argument:

Suppose a new technology were introduced that made it easy to get away with murder (e.g., David Friedman’s plan for Murder Incorporated). This technology makes it extremely costly, though, say, not impossible, to stop murders from occurring. What happens to the optimal amount of murder enforcement? The amount that must be spent to deter each murder has gone up, so the price of deterrence has gone up. Consequently, society should aim to deter fewer murders.

I was a little skeptical of where he was coming from…

Here’s what makes sense to an economist but sounds horrifying to most non-economists:

If we are looking at Eli’s scenario from the point of view of the objective goal of maximizing the number of lives we save, then logically, we must accept his conclusion.

Say his murder technology made it so that it would take $80 billion in order to save a single person from being murdered. Say, in theory, that we could have spent that $80 billion on buying enough penicillin to save 8,000 people’s lives. Clearly, it makes more sense to spend it on those vaccines–if saving lives is really your goal.

All of this is to say that there are always trade-offs, and while the goal you have in mind may itself be subjectively chosen, the trade-offs themselves are absolutely objective. We can’t always know what they are, but they’re not something you can just wish away.

And really, that’s what the IP lobby’s strategy so far has come down to–trying to wish digital technology and the Internet away. But they are not going anywhere.

There is going to be more piracy than there used to be. That is the new reality that we are all going to have to live with.

Fortunately for us, we’re not living in Eli’s nightmare murder scenario–this technological shift brings with it benefits as well as challenges. In fact, I would argue that the benefits dramatically exceed the downside, from the perspective of value being made available. For example, you get a kind of “production as consumption” that occurs–people who like to write or illustrate or take pictures and share them online with an audience of uncertain but probably limited size. This very post is an example of that. I value the ability to share my writing with others, however few they may be in number.

More to the point, you get near costless replication of digital content, and near costless distribution around the world. Has the rhetoric around IP protection reached a point where I really need to actively argue that those are very good things?

Alarmism aside, the big IP rights-holders are not exactly hurting for money. Services like iTunes, Cable TV, and Netflix are making money hand over fist for them. Apple has paid billions to developers of apps alone–who are also producers of intellectual products. Then there are services like Kickstarter which allow consumers to pitch in for the up-front costs of creating intellectual products, and services like Paypal which make it easy to donate.

So the mechanisms to reward creators in the new digital landscape already exist, and new ones are being built all the time. Consumers have demonstrated that they are willing to open up their pocketbooks and use those mechanisms when it’s for something that they genuinely value.

In fact, the cost of deterrence has increased so much that we should begin to rethink copyright law. We could increase the benefits of deterrence if we targeted only high-value infringements. This means that we should shorten the term of copyright, since high-value IP tends to be newer IP (in fact, copyright terms have increased in recent decades, a move in the wrong direction). We might consider expanding “fair use” copyright exemptions to include more non-commercial uses, since commercial infringements are more likely to diminish the value of a copyright. Most importantly, we should withdraw public resources from the enforcement of IP violations. Private enforcement through the tort system has a built-in safety valve: when the cost of enforcement rises, people will do less of it. But the criminal system is essentially a public subsidy for enforcement; no wonder that pro-copyright factions are attempting to criminalize copyright infringement through SOPA and other legislation.

The bottom line is that recent expansions of copyright terms and enforcement powers get the comparative statics exactly backwards. In an age of costly enforcement, it’s time to give up, at least at the margin, on copyright. And at the margin, content creators should just be more polite to content consumers.

We need to loosen, but not eliminate, IP law and IP enforcement.

In the long tail, creators are already doing what needs to be done–focusing on creating value rather than on fighting against technological destiny. Witness Scott Sigler, who has built up enough of a fan base to make a living doing what he loves. Or the numerous webcomic artists who have managed to support themselves while still giving away their primary product for free.

I think that eventually, the big IP rights-holders will adapt to the latest technological shift just as they adapted to VHS, cassettes, and vinyl records in the past. For instance, big publishers are starting to reduce the uncertainty of their investments by waiting for people to make it big online before drafting them to the major leagues, so to speak.

We are simply in a transitional moment. Eventually our institutional arrangements will make full use of the advantages that digital technology and the Internet provide for creating value.