Back when I was maybe a Sophomore or Junior in High School, I took the money I had saved from my summer job and used it to buy StarCraft. My relationship with StarCraft was to be a tragic one–I loved playing it but was absolutely mediocre at playing against other human beings. 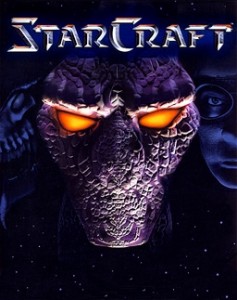 Many, many years later I acquired the sequel and started playing it. One thing that struck me, looking at it now, is how rich the universe is that Blizzard created for the game. The world-building and history-building for the two alien species–as well as for mankind’s own progression–is excellent science fiction in its own right. Moreover, the settings, units, and cutscenes are visually rich. 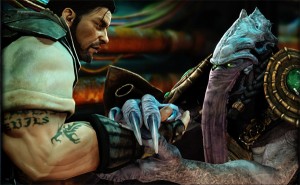 When Roger Ebert declared that video games could never be art back in the spring of 2010, the accusation was not a new one. His post managed to light a fire under the debate at the time, and he did eventually backpedal somewhat. I hesitate to address the subject at all because, like arguments over whether modern art is really art, or any argument around the definition of a word, there isn’t actually a right answer. But a conversation on the subject with some friends recently got my mind working, and I felt an urge, as usual, to think it out through writing.

I’m not interested in what towering intellectuals or the Supreme Court have to say on the matter; and I’m certainly not interested in trying to make some kind of tautological, game=art by definition argument. How we experience art is a very personal thing, so it is from my personal experiences with gaming that I will proceed.

First of all, I think it’s crucial to clarify what it is we’re actually arguing over. I think Alex hits this on the head:

This is really a debate over status, with gamers wanting to elevate the status of their activity, and by proxy, themselves. Opponents fear that calling games art will lower the status of art.

This is what it’s all about. It isn’t because people are really passionate about their particular definitions of the word “art”. It’s because we have culturally come to use the word art to talk about something higher, something refined.

If you read the original Ebert piece, he is quite clear about this–saying that “No one in or out of the field has ever been able to cite a game worthy of comparison with the great poets, filmmakers, novelists and poets.” He even admits that there are many legitimate definitions of art that are in common use which would encompass video games, but still he excludes them. Why? Because they have not demonstrated a propensity for greatness.

A couple of months later Ebert basically said he shouldn’t have stuck his nose in an area he knew next to nothing about–but his perspective isn’t limited to the inexperienced. Hideo Kojima, the mastermind behind the popular Metal Gear Solid series, also believes that video games are not art.

His argument is that video games are not art because they are entertainment. This seems to beg the question–is art never entertaining? That would miss the point, however–Hideo’s drawing a line between the lower form of expression–“entertainment”–and the higher one–“art”. He is saying that video games do not reach the status of art. When Ebert says it as an outsider it seems insulting, when an insider like Hideo says it we could consider it a kind of humility, but either way I have to disagree.

The Art of Making Video Games 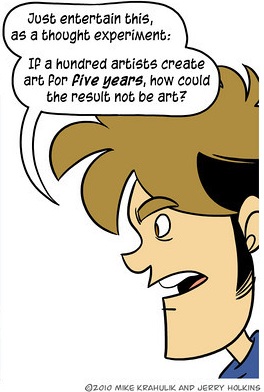 Comics are, to me, the greatest art form because there are so many elements to master. A person who creates a full comic must at the very least; be a great planner, a great storyteller, have an eye for layout, know how to pencil, ink and color in a way that tells their own story, and of course, they have to know how to write. Becoming more than simply “proficient” at all of these components can easily take a lifetime to learn.

Of course, at big comic publishing houses like DC or Marvel, they have people who specialize in the components–the writer may be a distinct individual from the person who pencils it, who may be different from the person who inks it, and so on. If we accepted Helmer’s criteria for what makes an art form great, the movies would be greater than comics, for you need not only good writers and good visuals, but good actors, and directors, and music. Along these lines, Wagner considered opera to be the greatest art form of all.

As I said, I don’t much care for hard and fast criteria like this, but if there’s one thing that video games have, it’s a lot of elements that require different talents.

The Super Smash Bros. series is a fun example of this, because the premise is so silly but the execution is so good.

First of all, the stages that the game takes place on are beautifully designed. 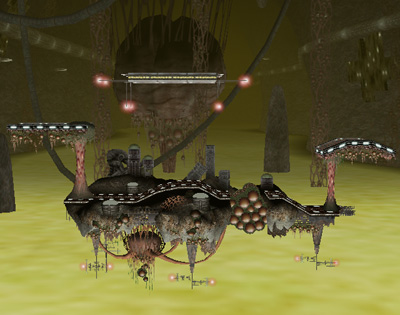 Some of the components of these stages are designed in order to be directly interacted with by the characters, but much of it is there for purely aesthetic purposes. 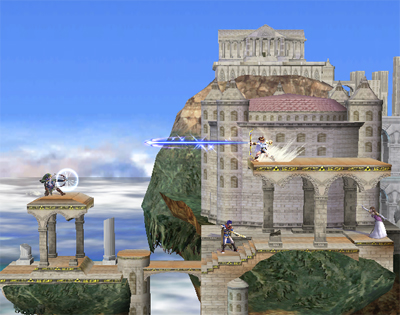 The opening sequence to the most recent game in the franchise features music composed by longtime video gaming music veteran Nobuo Uematsu.

There are three things that I find wonderful about this sequence. First, it is ridiculous–extremely over the top for a game that is basically Nintendo throwing together favorite characters from disparate popular games and making them fight each other. Second, for those of us who grew up as gamers, it is nostalgic–these are characters I’ve been interacting with since I was five years old. Finally, the music is good–the context may be strange but the fundamentals are sound.

What really blows me away about all of this is the sheer attention to detail that is given by producers of modern, high-end video games. It reminds me of a story I heard once about a Jan van Eyck painting that was so precise, modern day eye doctors were able to diagnose the subject.

Finally, at the risk of getting semantic, it must be said that there is an art to making a good game. A game does not need a good music score or visual design in order to be fun, but making a game that is fun is hard. Figuring out how to do that is a skill in its own right, one that people like Hideo Kojima and Shigeru Miyamoto possess to an abnormal degree. 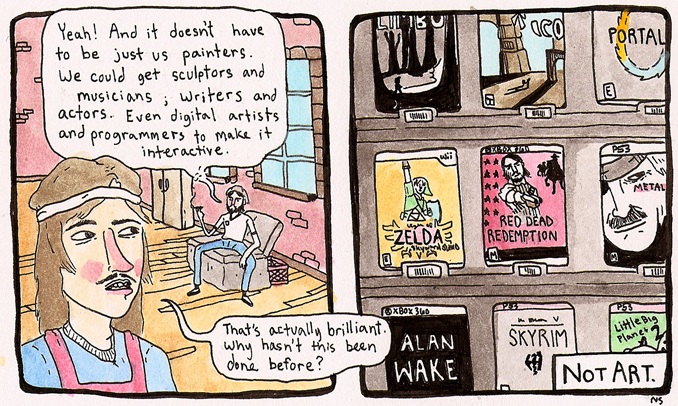 A few months ago, my siblings, some friends, and I went to see the National Symphony Orchestra play video game music. Meanwhile, the Smithsonian has an upcoming exhibition on the Art of Video Games. Whether or not particular individuals think of video games as art, it’s clear that the high status institutions, seeking avenues to remain relevant, are increasingly welcoming contributions from video games.

It may be that, given time, video games will be widely accepted as an art form. Even under those circumstances, the art of video gaming, like all art, would remain a highly personal affair.